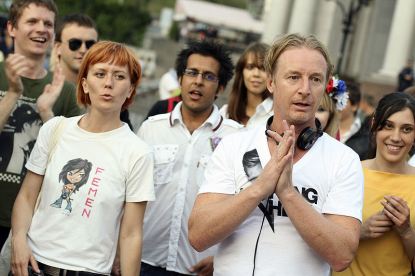 Anna Hutsol, left and DJ Hell, right, at “Ukraine is not a brothel” Femen protest against sex tourism and prostitution in 2009 in Kyiv, Ukraine (photo, Femen Women’s Movement, Flickr/Wikipedia)

ZURICH, SWITZERLAND – Anna Hutsol, co-founder and president of Femen, is at a centre for people requesting asylum in Switzerland. She has been at the Rapperswil centre for a month, she told RTS public broadcasting 1 March.

Femen is the group of feminist political activists in Ukraine who came to fame initially for baring their breasts in public.

RTS published the information as AP and other agencies reported on the worsening situation: ‘Russia’s parliament granted President Vladimir Putin permission to use the country’s military in Ukraine and also recommended Saturday that Moscow’s ambassador be recalled from Washington over comments made by President Barack Obama.”

Hutsol told RTS she has a sister in Winterthur and that she applied for asylum at the end of October 2013.

She has been watching the demonstrations and fall of former President Viktor Yanukovych from Switzerland, but she has a visa for France and under Dublin Accord rules her request for asylum may have to be treated by France rather than Switzerland.

She says that although the former government has fallen it is too risky to return to Ukraine. She and her fellow activists were attacked last summer by Russian and Ukranian special forces and those who attacked them have not been found. The Femen group fled Ukraine to set up a base in Paris last year.