You can hear us shouting "Fuck off, dictator!", "I'm not your sex toy!", or "Religion is slavery!" You can see our half-naked bodies facing Berlusconi, Putin or the Pope. You can feel how deep our anger is by looking in our eyes. We are feminism's shock troops, a spearhead unit of militants, a modern incarnation of the word fearless.

We are Femen. Our nakedness attacks the raw nerve of the historic conflict between women and "the system". We are nothing less than its most visual and fitting embodiment. Our activists' bodies represent undisguised hatred for the patriarchal order, and display the new aesthetics of a rejuvenated woman's revolution. 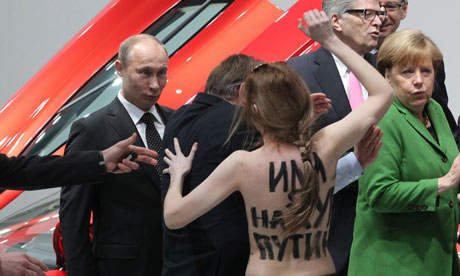 
Femen is our attempt at rethinking the history of feminism in its entirety. We believe that if women are left with little more than satisfying sexual desires as a life purpose, then our sexuality must become politicised. We are not denying our potential to be treated as sex objects. On the contrary, we are taking our sexuality into our own hands, turning it against our enemy. We are transforming female sexual subordination into aggression, and thereby starting the real war.

Make no mistake about it: we are at war. This is an ideological war, a war of traditionalism against modernity, oppression against freedom, dictatorship against the right to free expression. We are targeting the three principle manifestations of patriarchy: religion, the sex industry, and dictatorship.

"I didn't have time to see if they looked good or not, whether they were blondes or not" – such were the words of Putin after our most recent act of diversion, when Femen activists confronted him in Hanover, shouting to his face, "Fuck you, dictator!" Putin was quick to smile, but a Kremlin official was already demanding that Germany punish our activists. Within half an hour, four criminal cases had been opened against the dictator's assailants.

This is our reality. Femen activists are arrested, beaten up or even kidnapped, as happened to us in Belarus after our protest ridiculing president Alexander Lukashenko in Minsk.

Machismo can be defeated only through feminine rebellion. No authoritarian leader is interested in popular opinion, which would personally hurt him. Femen's tactics aim to do just that: hurt and humiliate them personally. Tossing shoes at Bush is nothing compared to our attack against Putin. Never before had he found his holy body, under the protection of dozens of professional security guards, so imperilled.

We were amateurs when we demonstrated against Putin in 2011, in Kyiv, dozens of kilometres away from our target. But we improved our skills when we besieged the polling station in Moscow in 2012, just 20 minutes after our Putin had left the place. One year later, we faced him and bared our breasts in defiance.

Putin is a homophobe and an oligarch embodying the merger of church and state, putting his personal interests before those of 150 million people in the process. Only recently has he announced that Russia is not a country for gay people, just as our George H W Bush, in his time, said the US was not a country for atheists. Putin is not stopping at that, so we are going to stop him.

How, you ask? Yes, dear readers, with our bare breasts alone! We are responding by knocking down the great oligarch and his security-service clowns, and with them, the image he has been so carefully cultivating.

Femen is a huge experiment. Every day we find new ways to destroy the patriarchy, new words with which to answer our opponents. We are calling for a global sexual revolt against the system. We cannot tell you of our upcoming plans, or what the final result of our struggle will be, but we're working on them around the clock. The only thing I can say for sure to all those against whom we are fighting is that we are not about to let you enshrine such shit as yourselves in a cult.