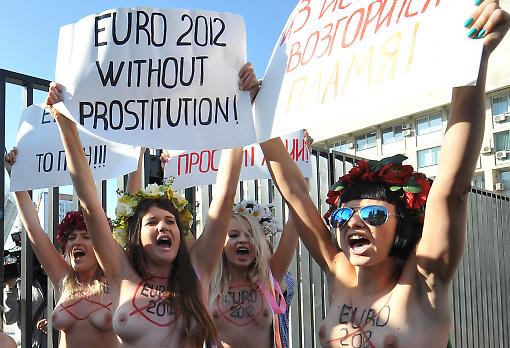 Despite both the influence of the West over the impoverished ex-Soviet Bloc, and its westernisation after 1989, eastern Europe often seems worlds apart from its richer counterpart.

That's an important context to remember when considering the Ukrainian feminist collective Femen. They come from a country with an extreme and enormous sex industry, widespread abuse of women, and also "third world" levels of poverty. Femen's performances often take place in eastern European countries known for their lack of respect for human rights, like Belarus, where they were beaten and abducted. But they are also increasingly demonstrating in the west, stopping various international summits and ceremonial affairs.

Recently, they started to "recruit" young Muslim women in France, criticising them for wearing headscarves, saying it limited their freedom as women, and conflating, stereotypically, Islam and misogyny. In doing so, Femen were neglecting the years of struggle that are behind defending the rights of women from non-European/white backgrounds.

Not unexpectedly, they were dismissed by western feminists for crypto- or even open racism and an obsession with nudity, regardless of the context. In this case, both sides misunderstood the delicate circumstances of Femen's protests. Intersectional, progressive western feminists, concerned with the risks of racism and (post) colonialism, speak of Femen’s unhealthy obsession with nudity with suspicious disdain, not seeing that behind the admittedly “primitive” methods and controversial approach there’s a very specific reality that Femen are fighting.

Femen’s message and actions are not universal, and it would be good if the activists were aware of that. In a Guardian piece responding to critics, Femen organiser Inna Shevchenko gives a clear message of her obsession with Putin, his regime and Ukrainian situation. This is Femen’s context: the post-communist desert of sex industry, sex clubs, girls at your wish every minute of the night and day. When you check into a hotel in Eastern Europe - and the more to the east, the more likely it is - you’re expected to be interested in the wide offer of sex infrastructure: you’ll be showered with dozens of leaflets with “gentlemen’s clubs” and other adult entertainment.

Femen's protests before and during the Euro 2012 football tournament in Poland and Ukraine alerted many to the degree that the event would increase the exploitation of Ukrainian women, whose bodies would be in high demand. Ever heard of the "Ukrainian Bride"? Ever seen the objectifying treatment east European women get in western films or serials, from The Sopranos to The Wire, where we encounter a container full of stuffed Ukrainian women, sold for prostitution? When I arrived in Britain, I was told "but Poles aren't really 'white'", which means there are degrees to whiteness/caucasianness, and we're definitely the "lesser" white, for many geopolitical reasons.

Easterners may be white Europeans, but the western feminists have often refused to see varieties within that. Few westerners see the abuses of post-communism.

Femen are an example of a interesting strategy, powerful in its own right, which may outside of its context, go wrong. Their stripping not only makes them resemble the women who are exploited and who they’re defending, they symbolise women’s position in the society, whose presence and often meaning is reduced to their bodies.

In addition to that, wearing the ridiculously over-the-top, kitschy folk wreaths on their heads, they’re deliberately evoking male fantasies: those of sexy peasant women, coming from folk fairy tales. They mock the idea of an ideal folksy bride who is there at the mercy of men, created according to their most reactionary, primitive desires.

Femen have perfectly nailed the contemporary post-communist macho mood. The terror on the facesof the politicians they confront proves they manage to touch something visceral, something that they can’t even openly address. Their fearlessness, or flippancy, disrupted and disclosed the hidden meaning of situations that otherwise would have gone undisturbed.

Yet the recent scrap seems a typical case of mutual misunderstanding, with each side blind to each other’s concerns. Femen doesn’t see the racism behind labelling patriarchy as "Arab culture". On the other hand, the western pro-underprivileged women of colour feminists see in Femen only the distasteful theatre of naked boobs, which overlooks their needs. They don't see how they remain blind to the post-communist reality Femen represent.

White doesn’t always mean "privilege" - especially for in the UK, given how many Eastern European Women are working in the sex industry in here, because they have few other choices, or clean and serve in restaurants and do other unqualified jobs, despite often holding degrees in their native countries. Funnily enough, this happens because of a similar experience of "colonialism", though in a much wider sense than the obvious.

Femen and their critics should recognise each other's mutual underprivilege and abuse. it is painful to see the notions of "postcolonialism" only in the most obvious places. The post-communist “east” had and still has its own share of colonisation and suffering, which should be recognised.

The accusation that Femen are “fast-food feminism” suggests that those women come from some areas full of bling and money, when in fact this should stand only for how precarious they really are.