Topless women took to the streets recently to protest the 2014 IIHF Championships being held in Belarus. Or at least I think that's what they were protesting. It was sort of hard to pay attention. No, yeah, that's definitely what they were protesting. Because Belarus does not uphold democracy and human rights, Ukrainian feminist group Femen decided to stage a topless hockey game near IIHF headquarters to ensure that their objections to the nation were heard. And also, apparently, to reward the folks who picked that as the spot for the championships.

As per the Russian Times (via Yahoo! Sports):

The protest took place near the main office of the International Ice Hockey Federation in Zurich. Braving a severe frost, the protesters started a hockey game in the street wearing unbuttoned coats with nothing on underneath. Their demands, spelt out on banners, read: “Do not encourage dictatorship!” “Lukashenko, let’s play in Hague!” and “Slaves can’t play hockey!”

Here is a taste of what it looked like: 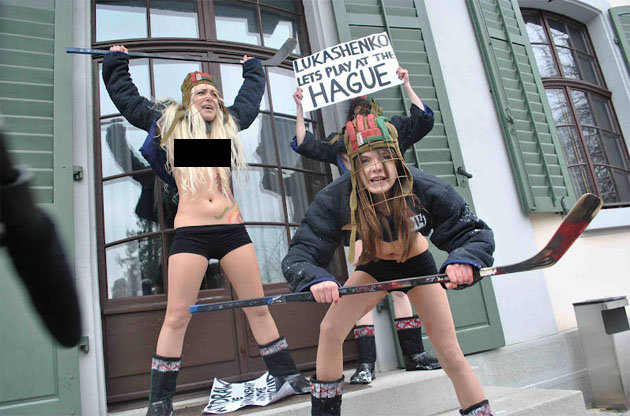 **You can get the full story (if you know what I mean) by going to Yahoo! Sports and clicking on their link to the Russian Times story that details this mess.**

What do you think? Is that the best way to make yourself heard on the issue of human rights? Are you even still reading what I’m writing at this point? HELLO?

Is Bruins Tim Thomas a Racist for Not Wanting to Meet President Barack Obama?