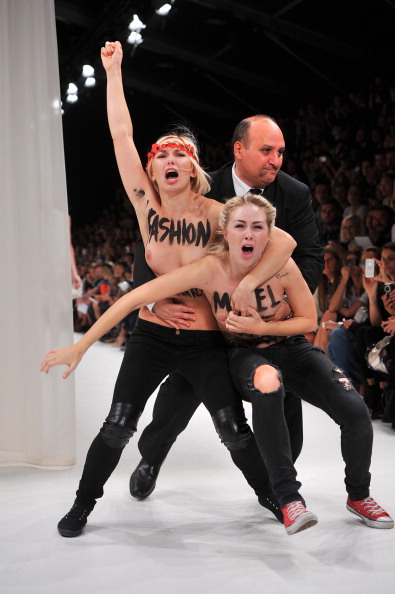 FEMEN has protested fashion week before–last year they demonstrated outside of Versace‘s show in February holding up signs that said “fascism = fashion,” “model do not go to brothel” and “anorexia” emblazoned under a modified Versace logo. This is the first time, though, they’ve actually managed to get past security and on to the runway. The two activists used their naked torsos as billboards; one had “model don’t go to brothels” scrawled across her stomach and breasts; the other, “fashion dictaterror.”

“Models don’t go to brothels,” is actually a play on the group’s earlier slogan “Ukraine is not a brothel,” which aims to dispel the notion that Ukrainian women were all either sex slaves abroad or prostitutes at home.

It’s unclear what exactly FEMEN is protesting at fashion week, or what it has to do with being topless. The organization’s site describes FEMEN as a global women’s movement, which aims to attack patriarchy in all forms, protect women’s rights, and promote action by…being topless. “FEMEN – is hot boobs, a cool head and clean hands,” the site reads. “The magic of the body gets you interested, the courage of the act makes you want to riot. Come out, Go topless and Win!”

We may not be going topless anytime soon–but we have to admit it’s certainly a great way to get attention for your cause; whether it’s the right attention or not remains to be seen.