While Pope Benedict XVI delivered his annual homily to Catholics around the world from a Vatican window Sunday morning, the ladies of Ukrainian feminist group FEMEN did their best to interrupt the Holy See's speech by calling out the Pope's homophobia… And stripping topless to do it.

Four FEMEN activists, who call themselves "sextremists," stripped off their coats amid thousands of Catholics gathered to hear the Pope's annual message on the "Feast of the Baptism of the Lord," revealing their bare breasts and the words "In Gay We Trust" painted on their bodies and on banners they held high. 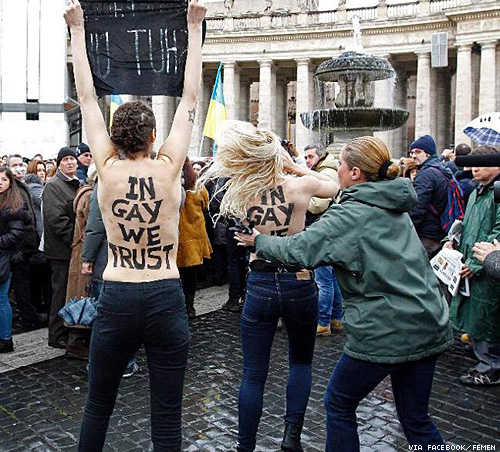 The feminists stripped down and started screaming "Homophobe, shut up!" during the Pope's speech. They were quickly detained by Vatican police, but the activists did not go quietly — they continued chanting, kicking and screaming until they were literally dragged into the police station.

Even as a (presumably) Catholic believer begins attacking a protestor by hitting her repeatedly with an umbrella, the FEMEN ladies don't relent.

According to FEMEN's Facebook page, where the group posted videos and the photos you see here, several members were arrested and detained for six hours at the demonstration. 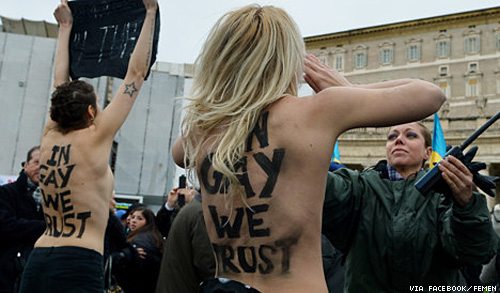 "Our God is woman," reads FEMEN's "About" section on Facebook. "Our mission is protest, our weapons are bare breasts!"

FEMEN has staged other similar protests at heavily Catholic demonstrations, including a similar action last November when FEMEN members stripped naked, except for a nun's habit and thigh-high stockings, and chanted similarly pro-gay messages.