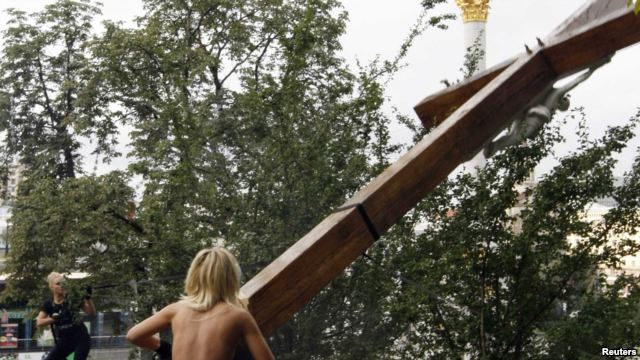 A Femen activist uses a chainsaw to cut down an Orthodox cross erected in memory of the victims of political repression under Soviet dictator Josef Stalin in Kyiv.

It has now been just over a month since a topless activist from the Ukrainian feminist protest group Femen brought down a cross in Kyiv with a chainsaw to express support for the Russian punk performance-art group Pussy Riot.

Although the vandalism has been widely denounced and an investigation into charges of hooliganism has been launched, there have been no arrests. But that may be about to change.

To mark one month since the incident, Ukrainian President Viktor Yanukovych met with religious organizations in the capital on October 17 and launched a tirade against what he called an "act of barbarism."

"Society trusts the church, and yet we can't say that the consciousness of all people could make us feel calm for the morals of society," Yanukovych said.

"I mean particularly various incidents that are resonant sometimes. For example, when a cross was cut down in the center of Kyiv, and thus the religious feelings of millions of people were offended."

He said the cross desecration merits "the toughest response from the police."

Given that three members of Pussy Riot were given two-year prison terms on similar charges of "hooliganism motivated by religious hatred" (the sentence of one of the three women was later suspended on appeal) and the notorious lack of independence of Ukrainian police and courts, Yanukovych's words could be a signal that Femen could also face a daunting day in court.

Coincidentally, the president of neighboring Belarus, Alyaksandr Lukashenka, told a group of Russian journalists on October 16 that he opposed "glorifying" groups like Pussy Riot and Femen by drawing unnecessary attention to them.

He noted that a group of topless Femen activists were in Belarus in December 2011, apparently impersonating him. However, Lukashenka noted, "My breasts look nothing like theirs."

He added that "if we catch them, they will put their breasts on someone else's shoulders."

Femen responded by thanking the "dictator-schizophrenic" for acknowledging their protest for the first time and calling on the international community "not to leave the people of Belarus face-to-face with this ageing, bloodthirsty paranoid and his repressive machine."

In the meantime, shortly before the Kyiv cross cutting, Femen leader Inna Shevchenko relocated to Paris, and the group has since set up a "training camp" for activists protesting "in high-risk environments."

The day before Lukashenka's comments, Femen activists attempted to break into the French Justice Ministry after 10 men were acquitted of multiple rapes following a 13-year trial.

"The French justice system is involved in the gang rape of underage girls," a Femen statement said. "Should this decision not be rectified, Femen activists will embark on a mission: punish those responsible with castration."